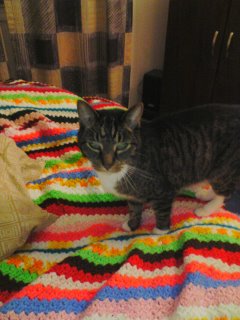 I got home around 6 PM this evening. I stopped at the grocery store and picked up some baby food (lamb) and some Pedialyte. The vet said that these might make him feel a little better. At this point, anything we can get him to eat and drink is good. The lamb will digest easier than some other foods and the Pedialyte will help replace some nutrients and chemicals he’s lost. He’s very anemic.

He was in his cat carrier when I got home. He didn’t greet me at the door, but when I came into the room where he was, he scurried out of his carrier. I went into the bathroom with him and shut the door. I opened up a jar of lamb and he started going to town on it. He really likes it. While I was observing him, he also used the litter box.

After he ate, I brought him into the living room with me so we could watch TV. I laid him down on an afghan that a friend of mine made for me. He was content sitting there as I stroked him. He must be sick because he never used to let me do that.

I got up to do some things and he stayed on the sofa. I got out the other half of can of Science Diet K/D cat food. I went up to him and ran it under his nose. I then walked into the bathroom where I’ve been feeding him. He immediately jumped down from the sofa and scurried in after me.

I’m at least encouraged now that he still does have some good days ahead of him. I just pray that I’ll have the strength to not fall apart. As I write this, I’m starting to cry. Just when I thought all the tears were gone, they come back.