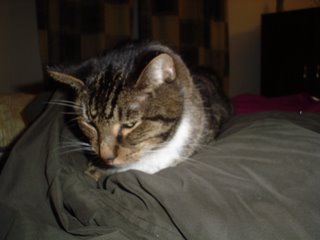 Rascal has officially made it to 2007. He’s not doing well, but he’s not doing too bad either, considering his problems.

He’s eating a little, however, finding things he will eat is a challenge. I can’t tell from day to day what he’ll eat what he won’t. He ate some lamb baby food today. That made me feel better.

I have read that cats with CRF will start to smell because of all the toxins that accumulate in their bodies. Rascal does smell now. Earlier today, I caught a whiff of him and all I could think about was the “stench of death”. I know it sounds pretty morbid of me, but those thoughts go through my head. I’m trying to keep being positive, but it’s difficult sometime.

I have gotten him an appointment to see Dr. David Jones tomorrow. He’s a vet that specializes in cats. Another friend of mine takes his cats to David. Also, I’m acquainted with him and I know he’s a good guy. I hope he can recommend some things to me that will improve the way Rascal feels and possibly extend his life. I’ll just have to keep the faith. Any thoughts and prayers anyone would like to offer would be appreciated as well.